After a long time, it appears that labor militancy is on the rise in the US.

“Thursday morning, more than 10,000 John Deere & Co. workers went on strike, the first major walkout for the agricultural equipment maker in 30 years. Nationwide, unions representing as many as 100,000 workers have walked out or are threatening to do so this month, amid rising corporate profits, a severe labor shortage, and a widening income gap.” [1]

“More than 10,000 John Deere workers went on strike Thursday, and more than 24,000 health care workers at Kaiser Permanente and about 60,000 Hollywood workers, members of the International Alliance of Theatrical Stage Employees, are preparing to strike. They join thousands of other workers who have recently faced a similar decision, including Kellogg plant workers who are on strike and Nabisco employees who recently ended a weekslong strike …

The simultaneous worker activism is known as a “strike wave,” said Kate Bronfenbrenner, the director of labor education research at the ILR.

“Strikes can be contagious for unions and workers,” she said. “There are shared issues that are pushing workers to go on strike — and workers are looking at each other and getting inspired.”[2]

It is also worth noting the demands for democratization:

“Why so many strikes at once? Let’s explore the meaning of the season. Strikes don’t happen overnight. A successful strike requires years of groundwork by organizers and activist workers alike. That’s because strikes demand much of workers: Although a union’s strike fund is there to help workers keep their lights on while they’re off the job, it typically doesn’t replace their full pay. On the picket line, workers often have to endure hostile conditions, such as rain or snow, or confrontations with scabs. Workers strike because they have exhausted all other options and when the hardships of striking are overshadowed by the hardships of working…..

Union members are feeling bold. The John Deere strike, for example, occurs within a larger context; UAW members are getting ready to vote in a referendum to allow the direct election of union officers by individual members, rather than by delegates. Supporters say this would democratize the union, which has been plagued by recent high-profile corruption cases. “I don’t think direct elections are a panacea,” the labor historian Nelson Lichtenstein told The Guardian in May. “But given the actual nature of the beast — the endemic corruption, the collaboration with management, the lethargy of some UAW leaders — given that, direct elections is something that would shake things up. It would release new social forces and energy.” The result could be a more militant union and fewer contracts rejected by members.” [3]

Even the sleepy IATSE is waking up:

“The International Alliance of Theatrical Stage Employees (IATSE), which represents some 43,000 Hollywood workers, is not known for rocking the boat.

In fact, the last time Hollywood crews staged a major walkout was during World War II.

Then, the Conference of Studio Unions was in a bitter turf war with rival IATSE, which was controlled by the Chicago Mafia, which suppressed wages and strikes in exchange for payouts from studios.

When CSU went on strike in March 1945, some IATSE members walked out in support, and violent clashes with strike breakers ensued outside the Warner Bros. Burbank studio — a day known as Hollywood’s Bloody Friday (also known as the War for Warner Bros.)” [4]

In 1945, strikers fought with workers trying to cross picket lines outside the employee entrance at Warner Bros. Studios in Burbank in what became known as the War for Warner Bros. (Andrew H. Arnott/Los Angeles Times) [5] 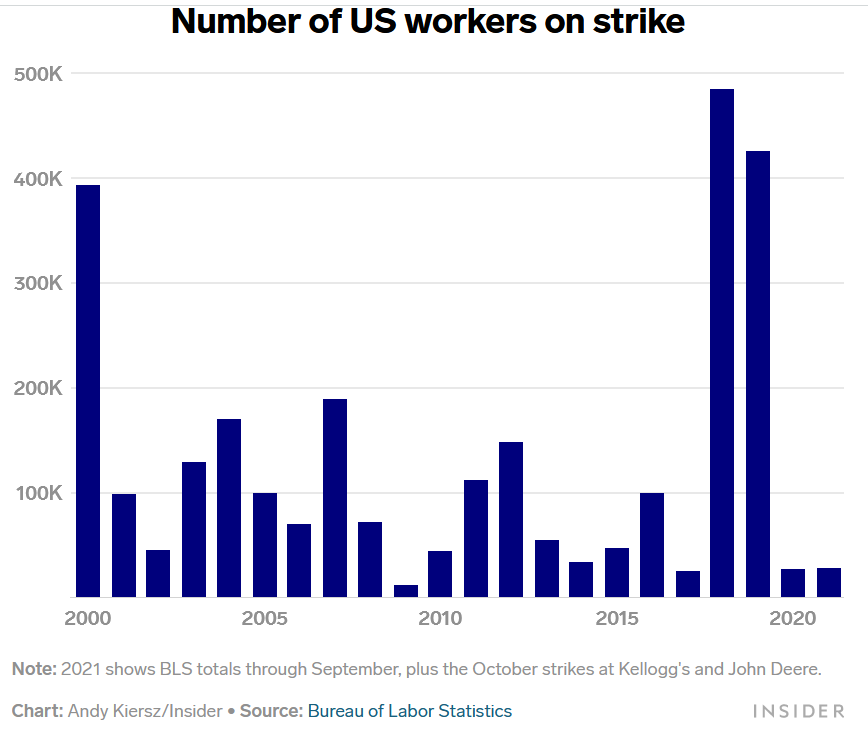 For a unionization drive of the lower sections of the working class!

For the democratization of the trade unions!

For better working conditions and pay!

For a working class and trade-union led boycott of Israel!